The Movement of the Dog By S.H.M. van Tatenhove van Roosenbroek,

The construction design of the dog is related to the origin of its function.

Abstract: The movement of the dog; static, dynamics and how.
Keywords: Movement, structure, bones, muscles.

This article and view on the movement of dogs is based on my background in zoology, my education and observing canines in their natural environment.

My introduction to the sport of dogs came very early in life, my family was involved in horses, cattle and dog breeding. I have always had a great passion for nature, especially for wild animals with a special interest in wolves and leopards. The maneuverability and speed at which a leopard brings down his prey has always fascinated me. This fascination lead to looking for answers to such questions as, "how can such an animal perform at such speed?; how is it possible that his muscles deliver such an energy to accelerate?"

This technical dynamics is visible in many of our dogs, especially in the sight hound breeds. The dogs can turn and accelerate in a very short distance. The Genetic evolution of these breeds allowed them to develop special bone composition, structure, size and diameter allowing the tendons and muscles juncture space. The structure of the bone is designed for the high forces the body is subjected to when in motion. The mechanics (dynamics) in the sight hound breeds are mainly in the back, which delivers
the energy and transmits this energy to the strong lumbar area. The lumbar is the bridge between the back and the rest of the body.

The forearm also has a propulsion function, the broad dorsal muscle, (lattissimus dorsi) attaches from both sides of the body, and from the
dorsal vertebra across the ribs to the inside of the upper arm and the breast muscle (pectorals) from sternum to the inside of the bow joint.
These connections are responsible for the propulsion function. The broad dorsal muscle has a variable speed control system, the contractions and relaxing parts of the muscle are self-regulating.

Years ago I hunted on the beaches and dunes with two friends, one owned an  Irish Setter the other a Greyhound and I with my Afghan hounds all in competition for the hare. The competition between friends as to whom had the fastest and smartest dog lead to the following observation. The Greyhound had the top speed but his maneuvering capability was less than that of the Afghan, however, the Setter had the greatest endurance capability. Although balance and structure are important and do enhance
performance did the Setter have a more inherent drive to perform the function?

This lead to the following question; "What structure will provide the correct movement to achieve endurance and efficient gait for the hunting  dog?" While pondering this question I would look for answers at dog show agility trials. There I was able to observe many different breeds working the trial's course. This day Border Collies make up the largest entry for any one breed in competition. The dogs climb the various structures and perform at high speeds, the dog that completes the course the fastest is considered the winner.

The conformation (structure) of the dog plays an inherent role in the speed at which he/she can maneuver the structures and obstacles and maintain balance and speed. This applies for all breeds performing in sports such as obedience, hunting, racing, and weight pulling
or just being a companion dog, there is no substitute for proper balance and structure (form & function). When evaluating a dog's performance of an activity be sure to ask yourself the following question: "Is he constructed (designed) to be a working dog, guard dog, hunting dog, go to ground dog, etc.? Most breed of dogs are born suited to a specific task, whether it be
the retrievers retrieving a fallen bird in the field or water; the sweat-spots runs (bloodhounds, bracks) tracking a lost child or working a
fox hunt; the Alaskan Malamute pulling a sled of supplies; the terrier going to ground for a badger, they are functioning per their design.

These activities demonstrate their performing capability, however, one may perform better than the other, and use his energy more efficiently, and this is where a balanced in construction enters the picture. These dogs just glide
effortlessly whether it is in the breed ring, or in the field.

At dog shows, breeds are sorted into specific groups, the groups are differentiated by their function, i.e., Sporting, Working, Terrier, Herding, Hound, Toys & Non-Sporting. Within these groups each breed is judged on its standard. Within each standard there are certain criteria that the dog should meet, movement, breed type & function receive the most emphasis.

Breed type identifies it to its breed, movement gets it where it is going and function - can it perform what it was bred to do. During my
observations at ringside, I've noted that judges follow the following judging pattern. Each dog is judged in hold (static) and in trot
(dynamic/movement). By this process, the judges narrow down their selection of the best overall dogs for that class.

In spite of the fact that many breed standards describe movement in just a few words, one can find a key to movement in the standard's history paragraph on the original function of the breed. What is important for a well build dog? The skeleton and muscles; "fore and back part and the center of gravity of the body". The skeleton makes the shape and form of the body, besides the tonus (muscles) an indicator is the health and endurance of the dog in motion. The skeleton offers the possibility to move.

Differents in forehand; replacements by angulation vs leglenghts.

The Forehand: Till several years ago, the dog world adopted the theory of the shoulder- blade angle from Mr. McDowell Lyon's book called "Dog in Action", he wrote in his book the best degree was 45* for optimal movers.
Researchers tested his theory and they have proven that it was incorrect. The best angle is approximately 20 - 30* for the shoulder blade. In the past they thought that the forehand was fixed to the body. The shoulder blade is greater on the bottom than on the top of the blade. The shoulder blade encapsulated by the muscles inside and outside and is firmly fixed against the body. Researchers never found even in the German Shepherd a 45* shoulder blade, although in this breed an extreme angle is trendy. Muscle tension (tonus) needs energy to keep the body together, to stand still or stand up, this is the reason why a dog prefers to lay down when not engaged
in an activity. The horse and elephant on the other hand can fix themselves (so called pillar-shaped) and can nap in the upright position.

Under Lhasa Apso in action,

Important researchers on this science are Mrs. Rachel Page Elliot author of the book "Dog Steps and the New Dog Steps"; Dr. Curtis Brown author of many books about locomotion in the dog.

Another important author is Prof Seiflerle from Switzerland, years before World War II he stated that a 45* shoulder angle was impossible and proved it with his scientific work and skeletons.
Too bad many dog fanciers were skeptical and didn't believe him. After World War II suddenly his work became famous by Mr. DeGroot and 25 years later by Ph. D. Haukt. For a harmonious (sound) movement it's a must that the forehand have the capacity to receive the driving power of the backhand.

Both must cooperate and be in proportion to each other. The center of gravity of the body is on 1/3rd of the chest just behind the scapula
(shoulder blade). A disturbance of the gravity point causes the dog to make a move (cause and effect chain of events), the result will be a disturbance in the center of gravity. The agility of the dog that springs over the fence makes his take-off with his hind legs. His legs propel him over the fence, when the dog comes down on the other side, the two fore feet are the first to make contact and absorb the impact of the shock followed by the rest of the body. The body shoves together like an accordion (concertina),
as elastic as possible to prevent bone fractures. The forelegs must be straight and strong in structure, the length and diameter in proportion to the whole body. The forehand contributes 10 to 15% toward the forward
motion of the dog, he shows this in the flowing slightly up going move of the withers during the trot.

The Backhand: The backhand (pelvis, femur, knee, tibia/fibia) has a totally different function than the forehand, its function is the forward motion, it disturbs the center of gravity point and it's up to the forehand to absorb the motions as efficiently as possible. The backhand isn't constructed to carry the body weight, the less the backhand has to carry the more speed he can generate with the same energy. 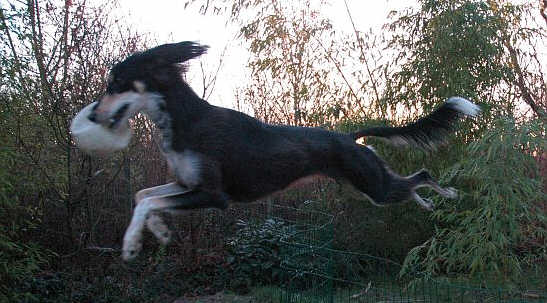 
The power developed by the backhand flows from the ground up through the legs and joints via the pelvis and loins to the rest of the body. A good pelvis angle is important, ideal is 30* to the horizontal. The backhand is a fixed connection with the rest of the body. A harmonious gait is the result of a well developed fore and backhand which shows a smooth movement
with few top line motions. The forelegs reach (illustration) to nose length, the back legs will put down in front of the pelvis, and stay there
till the movement of the body just crosses the back feet. The stride will then be settled correctly.

Other articles by S.H.M. van Tatenhove van Roosenbroek are:

Top   I  copyright,legal and email statement