Dr.Gerlinde Janssens is a certifite in veterinairy opthalmology and I did had the pleasure to meet her through the University of Ghent, faculty of veterinary, animal genetics, were we discussed recent inheretid eye-diseases, I do want to thank her for sharing her knowledge with us, for the benefit of our dogs.

Cataract is a common disease in the Lhasa Apso breed as well.

The purpose of this article is to answer frequently asked questions about cataracts.


WHAT IS A CATARACT ?


WHAT IS THE STAGEING OF A CATARACT ( ARE CATARACTS ALWAYS COMPLETE ? )

There are different stages in the development of a cataract.

When less than 10-15 % of the lens volume is affected, one calls it an " incipient " or early cataract.
First signs may become noticeable ( see figure 1 ). 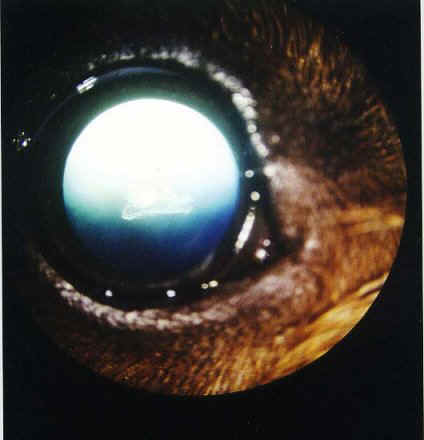 With progression, more clouding develops, but there are still clear areas within the lens, through which the retina can be inspected. The cataract is referred to as " immature " ( see figure 2 ). At this stage
osmotic forces are taking place, causing changes within the lens such as entering of fluid, formation
of " water clefts " and an increase in lens volume. 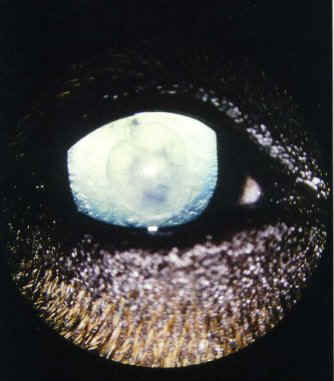 When the retina cannot be inspected anymore, and the patient is effectively blinded, the cataract is referred to as " mature " ( see figure 3 ). 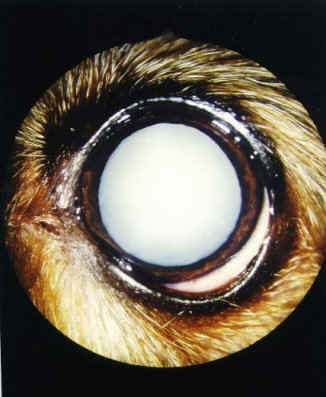 Further progression to a " hypermature " cataract can take place. Part of the lens, especially the cortex,
undergoes " liquefaction ", an enzymatic process. This can allow parts of the retina to be inspected again, and also for return of some vision ( see figure 4 ). A spontaneous resorption like this process is more likely to happen with cataracts in young animals. On closer examination, hypermature cataracts also show " creases " in the anterior lens capsule, caused by collapse of the capsule following a decrease in lens volume. This volume reduction happens because fluid and broken down lens proteins trickle through the intact capsule out of the lens into the eye, giving rise to inflammation ( uveitis ). Occasionally reflective chrystalline particles can be seen and these are products from broken down lens fibers and proteins. Providing there is sufficient liquefaction, the lens nucleus may sink to the bottom of the lens : this is called a " Morgagnian
cataract " . Sometimes hypermature cataracts also show deposits of white material under the anterior or posterior lens capsule.

WHY IS MY DOG AFFECTED ?

In many cases cataracts are of a hereditary nature. Examples of this are the Standard Poodle, Golden and Labrador Retriever, Cocker Spaniel, Bobtail, Siberian Husky, Tibetian Terrier, but many other breeds are amongst those affected. It is strongly advised in these cases not to breed from these affected
animals. Hereditary cataracts often are age specific, and have a typical presentation, dependant on the breed affected.

Other diseases, such as lens luxation, retinal dysplasia and GPRA ( generalised progressive retinal atrophy ) can be responsible for cataract development, and in these cases one refers to " secondary cataracts ". In GPRA, there is slow thinning of the neuroretina, often with night blindness as a first sign.


MY PREVIOUS DOG SUFFERED FROM DIABETES MELLITUS. HE / SHE WAS GIVEN INSULIN DAILY, YET STILL DEVELOPED A " WHITE PUPIL ".


Even when diabetes is properly treated and managed, the risk of developing cataracts remains high
as blood sugar levels often remain marginally elevated, ultimately taking it's toll on the lens.
With raising blood sugar levels, glucose entering the lens eventually is metabolised into fructose and sorbitol, the latter increasing osmotic pressure resulting in more water being drawn into the lens.
This causes swelling of the lens fibres and loss of transparency, and a rapidly developing bilateral symmetrical diabetic cataract.

Diabetes therefore must be ruled out in animals with progressive cataracts, and questions such as
whether the animal is polydipsic ( drinking a lot ), polyuric ( urinating frequently ) or polyphagic
( eating al lot ) must be included in the history taking. Blood and urine analysis will confirm.

MY DOG WAS FOUND TO HAVE A POSTERIOR SUBCAPSULAR CATARACT FOLLOWING AN EYE EXAMINATION. WHAT DOES THIS MEAN ?

Lets have a look at the anatomy of the lens. On the outside we have the lens capsule, which is at its
thickest at the front. Then we have an outside layer called the cortex, and in the centre we find the nucleus. A number of terms are used to help identify the location of opacities, f.e. :

- nuclear : opacity within the centre of the lens
- cortical : in between nucleus and lens capsule
- subcapsular : located just under the capsule

To be more specific, one could add whether the opacity is located at the front ( anterior ) or the back
( posterior ) of the lens, or one could describe the shape of the opacity ( spoke - like, triangular etc. )

WHAT IS THE EARLIEST AGE AT WHICH CATARACTS CAN OCCUR ?

Some cataracts are present from birth, and are termed congenital. Although visible from the moment
the eyes open, this type of cataract is often only diagnosed around 6-8 weeks of age or later. It is usually non progressive, and may even improve with growing, as the lens grows, but the opacity does
not change and therefore becomes smaller in relation to lens diameter.

Cataracts occurring between the ages of 1 and 8, are referred to as juvenile, whilst later onset ones
are termed senile.

THE VETERINARY SURGEON HAS DIAGNOSED A SMALL CATARACT IN MY DOG. WILL THIS EVENTUALLY LEAD TO BLINDNESS ?

It is to some extent unpredictable whether a cataract will progress or not. Nuclear cataracts tend to
remain static. The presence of vacuoles ( bubbles ) in the cortex or at he edges of the lens usually
predicts progression.

MY DOG IS GETTING OLDER AND I START TO SEE A BLUEISH REFLECTION IN THE LENSES. IS THIS A CATARACT ?

It is important to differentiate cataracts from lens sclerosis. The latter is an increase in density in the lens nucleus, through ageing. This is a physiological event. Throughout life, the lens produces layer upon layer of new fibers ( most of the this in the first year of life ), but the lens capsule limits the expansion or growth of the lens. Hence, older fibres are compressed towards the centre. This causes a
white - blue reflection in the centre of the pupil. The dog remains visual though, in contrast to a
" true cataract ". Using special equipment ( a direct or indirect ophthalmoscope ), the veterinary surgeon can still inspect the retina, however with severe sclerosis there will be loss of detail.
Of course, senile cataracts and nuclear sclerosis can go hand in hand, or one may precede the other.

ARE THERE ANY MEDICINES TO STOP THE PROGRESSION OF A CATARACT ?

So far, there is no medical treatment to slow down cataract progression. If a cataract occupies the centre of the visual axis, then a mydriaticum may be of help, by dilating ( widening ) the pupil and giving the patient improved vision around the opacity. With extensive cataracts, only extraction of the cataract will guarantee return of vision, but only if the retina is intact.

MY DOG HAS CATARACTS IN BOTH EYES AND MAY HAVE SURGERY, BUT THE VETERINARY SURGEON HAS ADVISED AN ERG BEFORE THE OPERATION. WHY ?

With mature cataracts, inspection of the retinae is no longer possible. Breeds suffering from gPRA
must have an assessment of the retina prior to surgery. A light responsive pupil does not necessarily
indicate a healthy retina, and therefore one needs other means to test the retina. This can be done
with electroretinography. The protocol includes light sedation, pupil dilation, and then the patient is
put in a dark room for 15 minutes. Following this, one electrode is placed on the cornea, and two more on the head ( nose and ear ). The ERG machine produces light flashes and these induce measurable electrical potentials in the retina. A computer then translates these into a curve which tells us whether the retina is healthy or not. A poor result will automatically exclude a cataract operation. At present, there is no treatment for gPRA.

Sylvia van Tatenhove van Roosenbroek knowledge of the Lhasa Apso and dog breeding her experience, the Topquality EL Minja's Lhasa Apsos exported all over the World